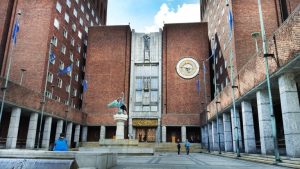 On Tuesday, 20 June 2017, we visited Oslo City Hall, a building which is remarkable both aesthetically as well as functionally. Inaugurated in 1950, the building serves as the city’s administrative body and seat of the City Council, and reflects the many different artistic styles of the first half of the twentieth century. The architecture of the building is the result of the confusion among architects and artists of the time who were attempting to combine the many stylistic movements into one piece. Because it doesn’t belong to any artistic style, the building truly is unique.

The inside of the building is also a living, breathing work of art in its own right. Walking through the rooms of the City Hall, one gets a sense of the Norwegian national identity exactly as the artists and commissioners wished to express it in the 20th century. The front hall, which is also the space where the Nobel Peace Prize is presented every year on the 10th of December, is flanked by two vast murals. The first that the eye sees when entering the hall is, as our guide described, “a mysterious manifesto of the 1920s.” It is an oil-based mural painted by Henrik Sørensen on wooden slats that depicts the essence of the Norwegian welfare state. 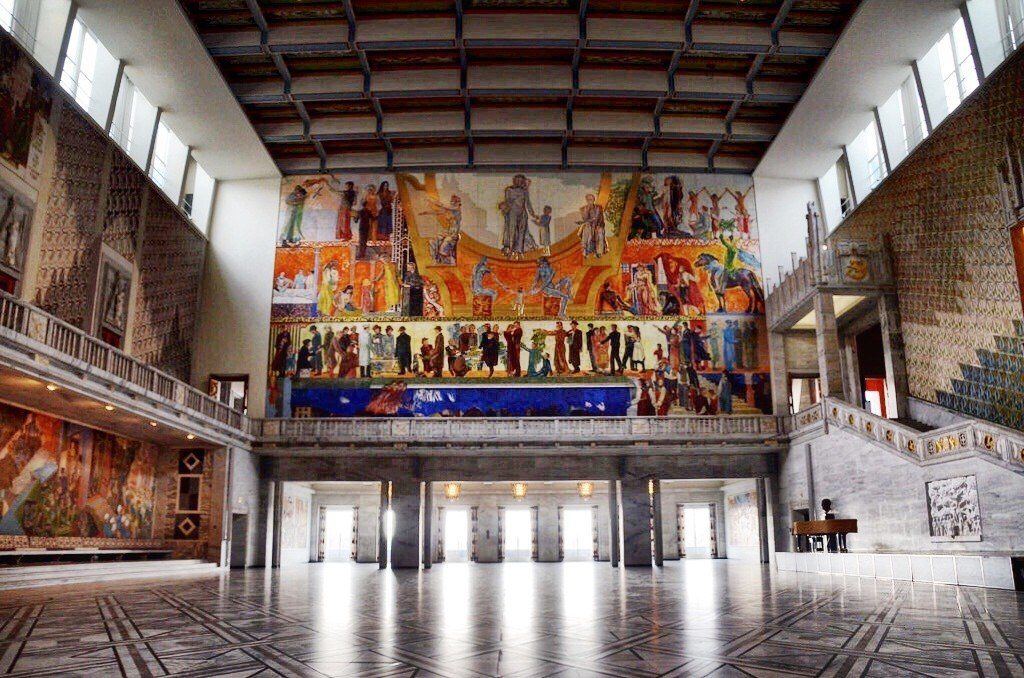 From the bottom left corner, Norwegians are entering the city from the countryside – one of whom is our fated Norwegian folk hero Askeladden. The viewer can trace his journey as he ascends through Norwegian society, being lifted up by the Goddess of Charity (i.e. the Norwegian welfare state). He eventually makes his way to the fairytale princess at the top right corner of the mural, completing in his journey – a success story of the welfare state.

The other side of the hall is a Fresco painting (painted on wet plaster) by Alf Rolfsen that depicts the three pillars of Norwegian identity: fishermen from the west, industrial workers in the center, and journeymen in the east. On either edge of the painting, Norway’s two Nobel prize winners are represented: polar explorer Fridtjof Nansen and playwright Bjørnstjerne Bjørnson. 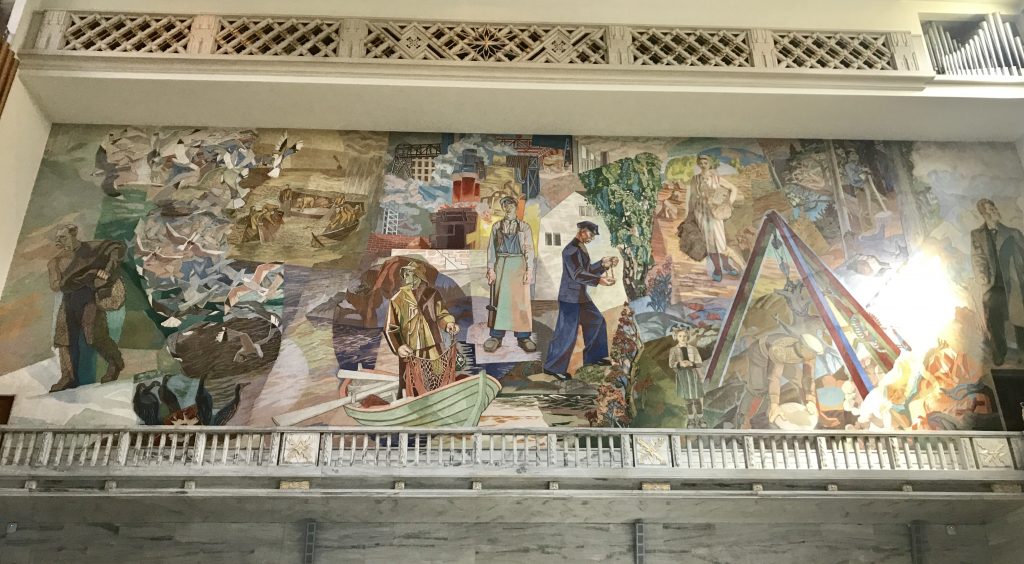 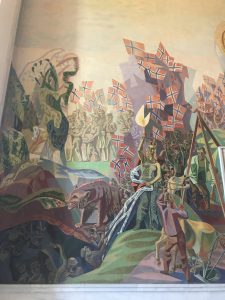 The Norwegian fairytale princess and her people at victory at last

Many other rooms express scenes of Norwegian culture, labor, and national history. In one room, all four walls are dedicated to depicting the story of Norway’s modern birth as a nation. It begins, interestingly, outside the country. The foundation for Western democracies lies in the French Revolution, and Norway recognizes this trans-European connection. Modern human rights grew from liberté, egalité, fraternité, and the Norwegian translation for this moto can be found across the room at the signing of the Constitution after the dark days of the Danish and Swedish unions had ended. At the end of the visual story, the quintessential Norwegian fairytale princess stands victorious with a bear in front of her and her people behind her.

My experience at Oslo City Hall was an informative and enlightening one. While learning the history of Norway and her national identity through the medium of paintings and murals was fascinating, I couldn’t help but notice what wasn’t being represented: the rest of Norway’s identity. None of the paintings depicted the Sami, Norway’s indigenous populations, or any of the country’s minority groups. If Oslo is to embrace its future as a multicultural city (and by extension, Norway’s future as a multicultural nation), it should do so with the intention of including all of its citizens into its narrative of cultural identity.

(Pictures from theolsobook.no and author)