Wednesday, June 14 2017, was a beautiful day for a stroll. As a class, we took a late morning trip to Grønland – a neighborhood located just east of central Oslo. The neighborhood is known for its melting pot of immigrant residents. Our assignment was to spend time walking through the neighborhood, participating in the human activity. We were told to choose one motif to focus on and observe our surroundings through that lens. 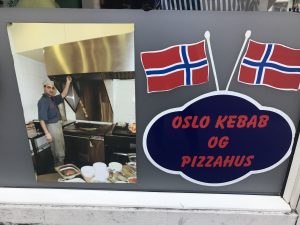 Make no mistake – your classic Turkish Kebab and Pizza House is still going to represent its Norwegian national pride!

I chose to conduct my participant observation through the lens of food. Now your first reaction to this, I’m sure, is skepticism. ‘Of course Darcy would use class time as an excuse to go off and eat all the food.’ And maybe that was the idea at first. But as I walked through Grønland, I quickly realized the brilliance of using food as a means to conduct human geography research. One of the best ways to connect with people is through their food – whether that be through sharing a meal, cooking together, or as a patron of a restaurant.

On the other hand, there is also no better way to recognize and study diversity than through food. As we ascended from the subway to the center neighborhood square, my immediate observation was that almost every storefront was related to food. The second observation, only a couple moments after the first, was that each food shop was different. From the Pakistani grocer, to the Halal butchershop, to the British fried chicken joint, it would be impossible for even the pickiest eater to go hungry in Grønland. As I walked from restaurant to restaurant, giddy over the endless variety of choices I had available to me, I felt my naivety take over: why would anyone think diversity is a bad thing? Just look at all this food! 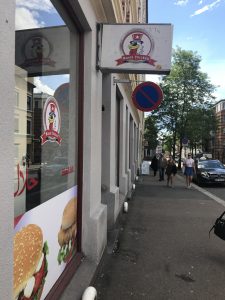 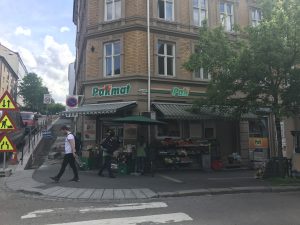 Of the multiple conversations I had during my midday walk, the most interesting ones took place at an Italian restaurant on the center square. A man (who, as it turns out, is also the owner of the new restaurant) was standing outside in a chef’s hat handing out free coffee to passersby. Never one to turn down a free coffee or a chance to chat with a local, I accepted the steaming cup with pleasure. Before I even had the chance to ask for cream, the jolly half-Italian, half-Norwegian informed me that “Norwegians only drink black coffee – milk is for children!” I knew then that this would be a good conversation. 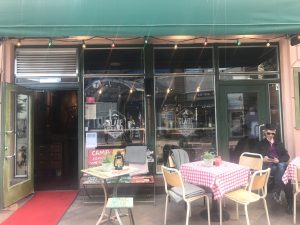 The owner and his business partner were receptive to my questions, especially since they were primarily directed to their place of business. They explained that their motivation to open an Italian restaurant in such a diverse neighborhood was because while you can get greasy pizzas at kebab houses on every corner, they wanted to provide a place with higher quality ingredients and options. Because, after all, “Muslims like pizza too! As long as it’s halal, of course.” They also explained that while their new restaurant was succeeding in its infancy, the month of Ramadan had been making a tangible impact on their daily earnings.

In an entirely different vein of Norwegian migration, I also spoke with the manager and head chef of the restaurant. He was a young man from Sweden who came to Norway to escape the abysmal job market back home. He has jumped from job to odd job within Oslo – just a few being DJ, childcare provider, and bartender. He spoke of the ease of moving between countries within Schengen and how important that mobility is for Swedes looking for work. Furthermore, being from Sweden designates him as a member of the Nordic Passport Union, which allows citizens of Nordic countries to travel freely among other countries within the Union. This conversation made me think of the migrants coming from Mexico to the United States and the stringency we seem to attach to the concept of state sovereignty and borders. How entirely different our situation back home would be if North Americans had the same freedoms and mobility as that of Europeans.

As international migration continues around the world, the city of Oslo is only one of many in Europe that is attempting to navigate the unclear waters of integration. The neighborhood of Grønland provides a unique case study for both human geography and migration research. The ways in which these restaurant owners have molded their business model to serve both their diverse clientele and people looking for work can be viewed as an innovative way to bring cultures together around something they all have in common: the dinner table.